In July of 2018, the world was transfixed by an impossible operation to rescue the 12 boys and their coach of the Wild Boar football team from the flooded Tham Luang in Mae Sai, Thailand.

The rescue was an incredible success and gave witness to a true Mission Impossible unfolding before the eyes of the world. CMRCA was there and played an active and important role in the rescue often working quietly in the background. CMRCA was featured heavily in the recent Thai PBS documentary. Watch all the episodes on our YouTube Channel.

While the entire CMRCA and Progression Equipment teams supported the effort from Chiang Mai, a smaller group went to the cave site and supported the effort on the ground during the 17 day ordeal. The CMRCA team played a key role in the operations command center helping to coordinate the effort. Additionally, the team played a major role inside the cave between chambers 02 and 03. As the dive portion of the rescue ended in chamber 03, there was still a major dry cave rescue that was required to get the boys safely to the entrance and to medical help.

On 07 July,  CMRCA led an international team in installing the rope high lines used to move the boys over uneven terrain in the cave. The CMRCA team then managed those lines during the three days of the actual rescue on 08-10 July ensuring the boys made it safely through that section of the cave. They collaborated with Thai Navy Seals, the US Air Force, The Australian Federal Police, and Chinese rescuers.

A huge thank you to our main sponsors of Black Diamond and Sterling Rope for the incredible equipment that kept all of us and the boys safe during the rescue mission.

Josh initially supported the effort by coordinating communication and caving equipment among international cavers from the CMRCA office in Chiang Mai. However after much discussion with the team onsite, he decided to head to Mae Sai on 02 July 2018 to assist with the effort.

Between the 2nd and 5th of July, Josh explored the hills of the area with other CMRCA team members looking for alternate entrances and potential cave leads. He advised various military commanders and the Department of Disaster Prevention and Mitigation about the potential of those leads. On July 06, Josh led the CMRCA team into the command center of the cave rescue and took on the role of Lead International Team Coordinator working closely with the Royal Thai Government, Navy and Army as well as International rescue teams including the BCRC (British Cave Research Council, US Air Force PJs, as well as Australian, Chinese and Thai teams.

Josh’s experience as a business leader, corporate facilitator and cross-cultural consultant as well as his fluency in Thai language and culture and experience as a caver gave him the skills needed to be effective. Josh played a crucial role facilitating, coordinating and translating among the various teams and participated in a number of high-level meetings with The Royal Thai Government and Armed Forces from the 6th of July through the 13th of July.

On the last day, he had the honor of facilitating and translating a thank you session between the parents of the boys and the British cave divers. Josh continued to coordinate and advise with the Ministry of Foreign Affairs and the Department of Disaster Prevention and Mitigation long after the rescue.

For his service during the cave rescue, Josh received the honor of Knight Commander 2nd Class of The Most Admirable Order of the Direkgunabhorn given on behalf of His Royal Highness by Prime Minister Prayut Chan-o-cha.

Taw has dedicated his life to rescue and during the rescue operation it showed. An experienced climbing and caving guide, Taw has participated in numerous cave expeditions to push and map uncharted caves in Thailand. He is certified in NCRC (National Cave Rescue Commission) and is also an instructor of the international Rescue3 organization.

Taw and his team of high angle rope rescuers were some of the first cave rescuers on the scene arriving and entering the cave on the 24th of June. They spent the day with British caver Vern Unsworth at the 3-way intersection and pushed as far as they could to try and reach the boys.

For the next 16 days, Taw continued to explore the hillsides looking for possible alternate entrances into the cave. He advised and collaborated with various members of the 34th Army Circle exploring a number of cave entrances and coordinating a large team of rescue volunteers.

On 07 July, Taw returned to the cave with the CMRCA crew to help lead the effort to install high lines between chambers 02 and 03. These lines were used to transport the boys after the dive portion of the rescue was completed.

Taw was stationed on one of the high lines ensuring the boys were transported safely across the uneven terrain. Taw was thanked by the parents of the boys and also received a Royal Decoration and thank you given by Prime Minister Prayut Chan-o-cha for his service.

Mario joined the rescue effort on 01 July. As an experienced climbing and caving guide and an instructor for the international organization Rescue3, he has an excellent skill set that was able to contribute to the effort. Mario spent initial days investigating potential cave leads with the rest of the CMRCA team. He, Josh, and Add worked closely together to explore the Ban Pha Mee area until the 05th of July.

On 06 July, Mario joined Josh in the operations command center where he and Add connected with Vern Unsworth and the US Air Force PJs and began making a plan for the rope high lines that would be necessary in the cave.

On 07 July, Mario collaborated with Taw and led the CMRCA team back into the cave on 07 July to install and prepare rope high lines and belay systems that would be used in the rescue.

From July 08-10, Mario played a key role in installing and managing the rope that was used to belay the boys up from Chamber 03 into the space before chamber 02 where the boys received medical attention. He led a team that included Rescue3 rescuers from China and had the opportunity to experience a heartfelt thank you from the parents of the boys.

Mario attended the Royal thank you ceremony at the Dusit palace in Bangkok in September.

Add joined the effort with Mario on 01 July. Add is one of the best trained climbing guides in Thailand and SE Asia and on track to become a certified Rock Guide with the AMGA (American Mountain Guides Association).

Add joined Josh and Mario in their efforts to find alternate entrances to the cave until the team moved into the command center on 06 July.

Add then applied his skills as a member of the CMRCA team building rope high lines and assisting with the operation of the high lines during the rescue. In addition to the CMRCA team, Add collaborated with the other international team members to ensure the boys were safely transported to medical help outside the cave.

White’s skills as a tourist guide and program and event coordinator were critical in helping to organize various members of the rescue teams. White traveled to the rescue site on 24 June with Taw and remained onsite throughout the rescue providing support to the rescue team and assisting with coordination and administration.

She also played a critical role in finding a wetsuit that was small enough that it could be used on the smallest boy during the last day of the rescue.

Good friends and longtime partners of CMRCA, Toto, Jojo and Thep are all experienced rescue professionals as well as experienced rock climbers. They are all trained in Technical Rope Rescue with Rescue3 through CMRCA. They joined Taw and his efforts early in the rescue and put in a tremendous effort to find alternate cave leads that could be used to help the boys.

When the CMRCA team was called into the cave to rig rope systems, Toto, Jojo and Thep all joined the effort assisting with the installation and the management of the rope high lines between chamber 03 and 02 including providing words of encouragement to the boys as they were moved across the lines.

They played a crucial role in ensuring that the high lines were managed properly so that paramedics and medical professionals could focus on medical care for the boys.

In a flurry of last-minute requests, Rebecca put in tremendous effort to assist Josh and Vern and the Royal Thai Government in putting together cave surveys that showed the conditions inside each chamber.

These maps were crucial in helping authorities understand what the situation was like inside the cave and along each chamber and were used in official reports to high levels of the government.

While our rescue team was onsite in Mae Sai, the rest of the CMRCA team worked hard to support the effort providing equipment, logistical support and keeping the company running. Without their efforts, the rescue team would never have been able to spend such a long time out of the office. 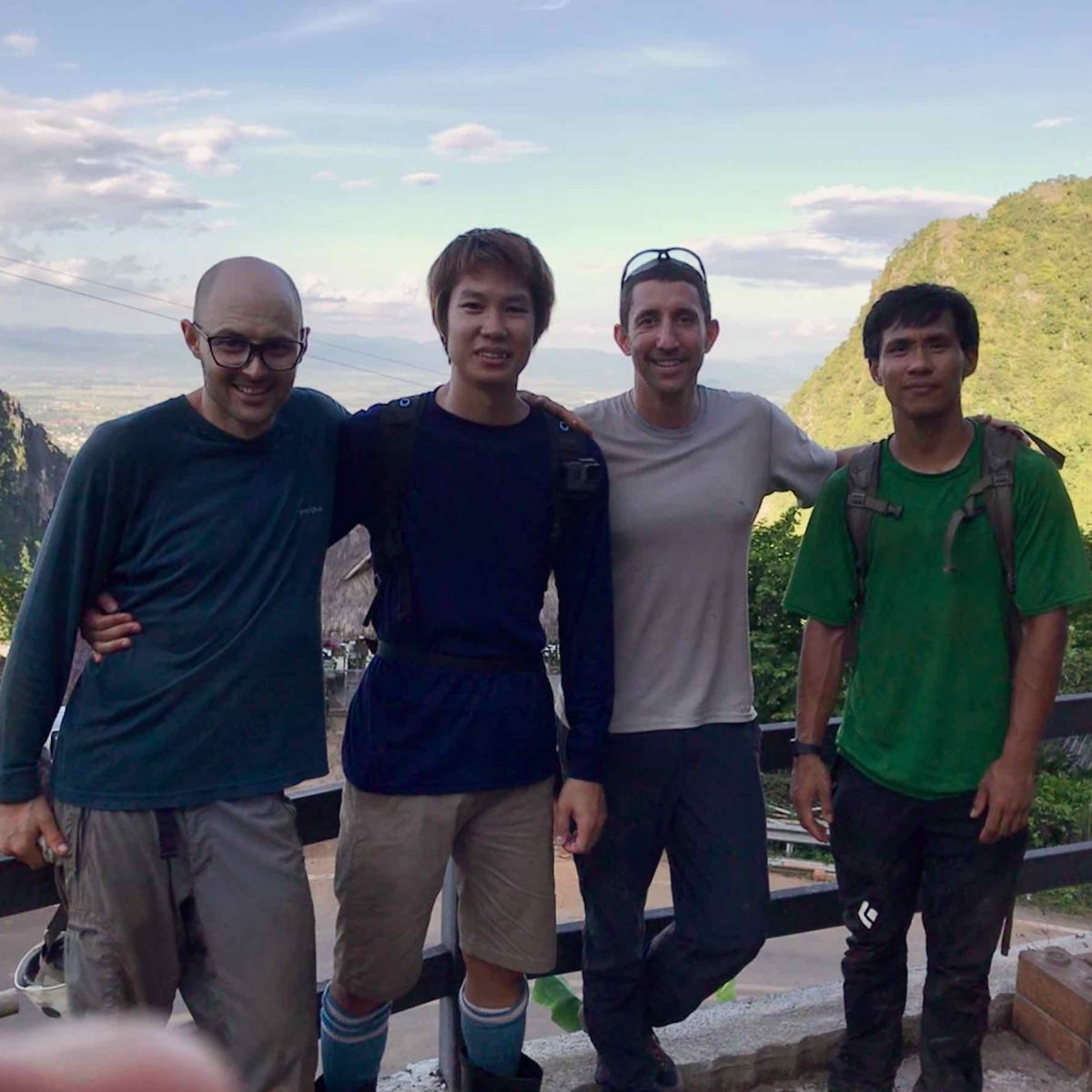 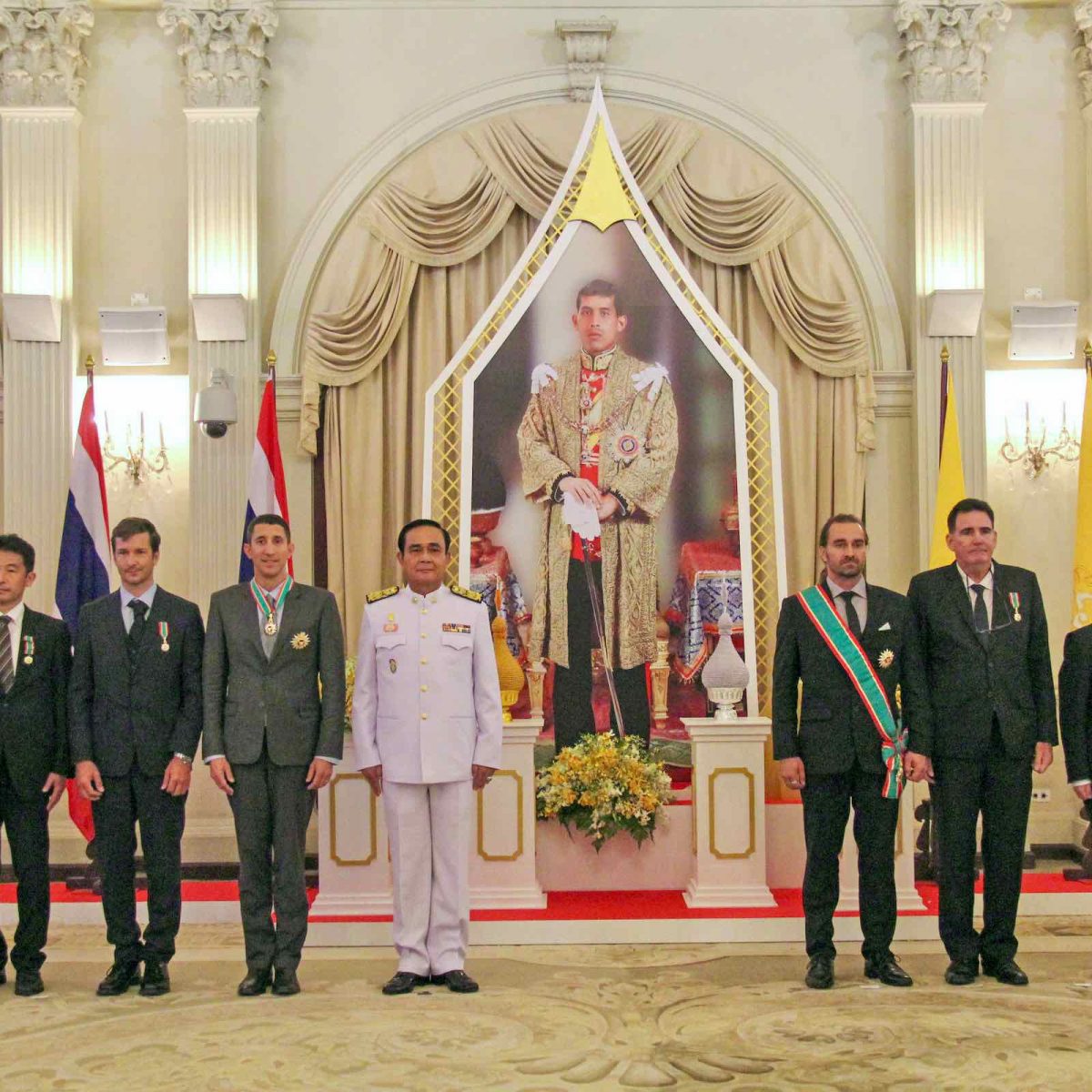 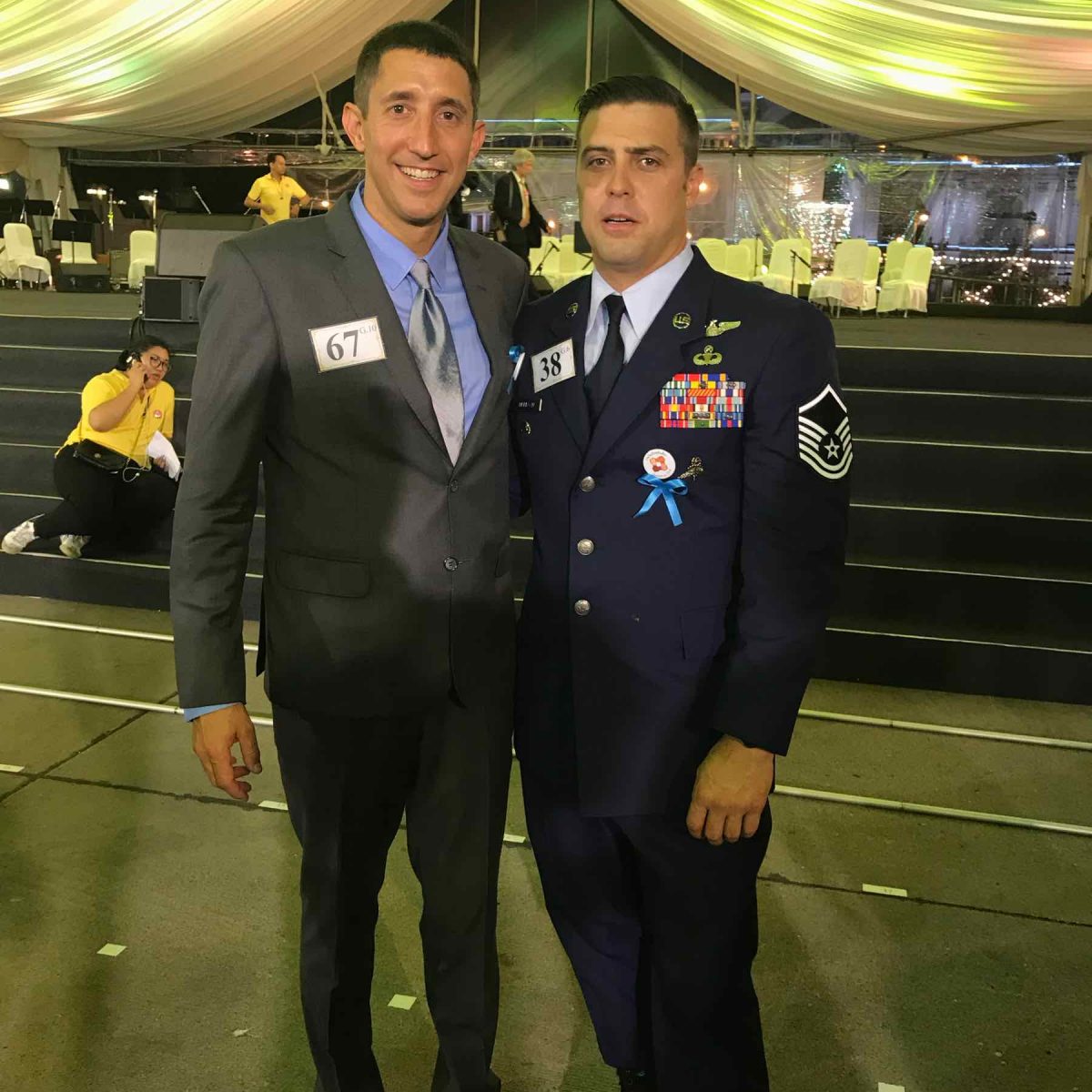 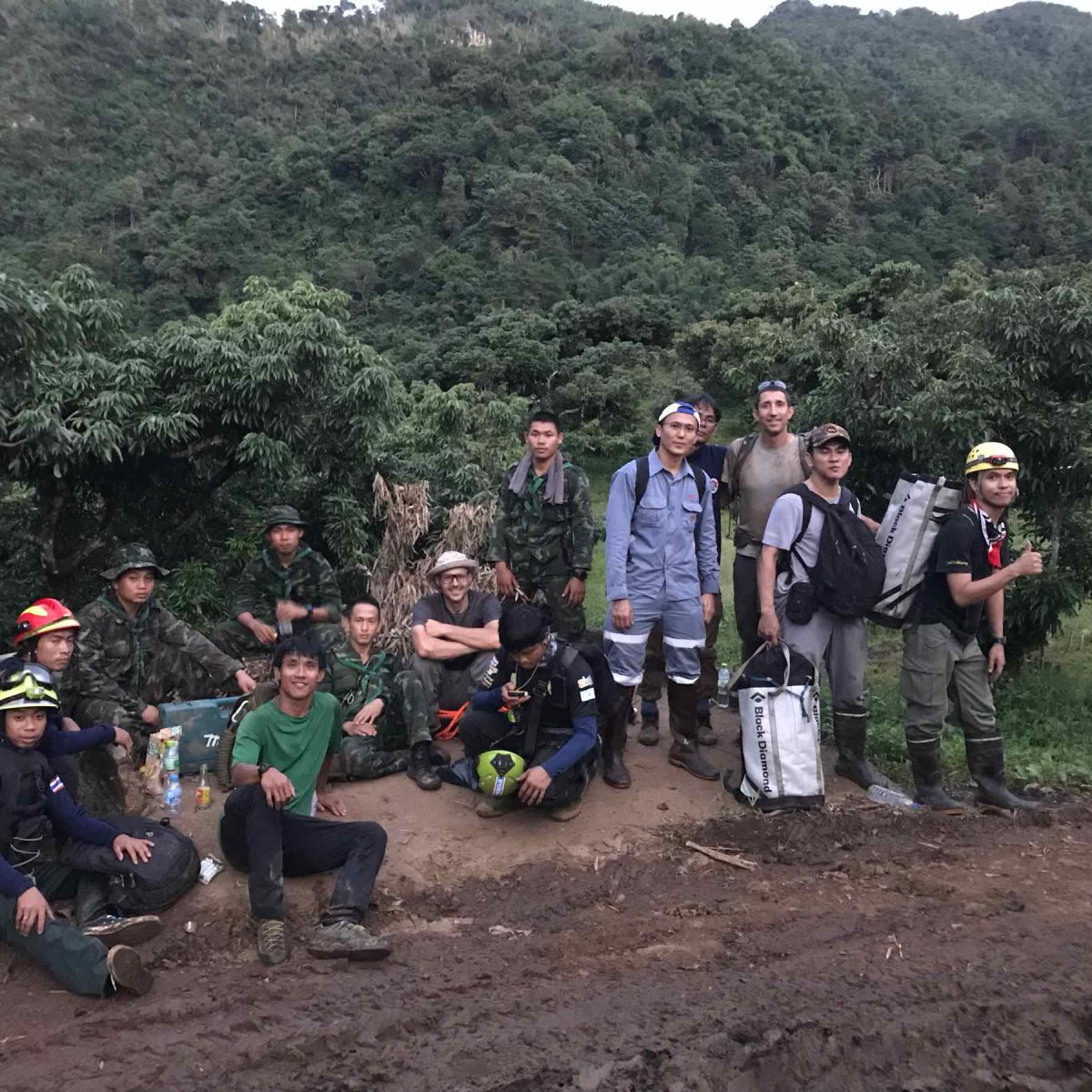 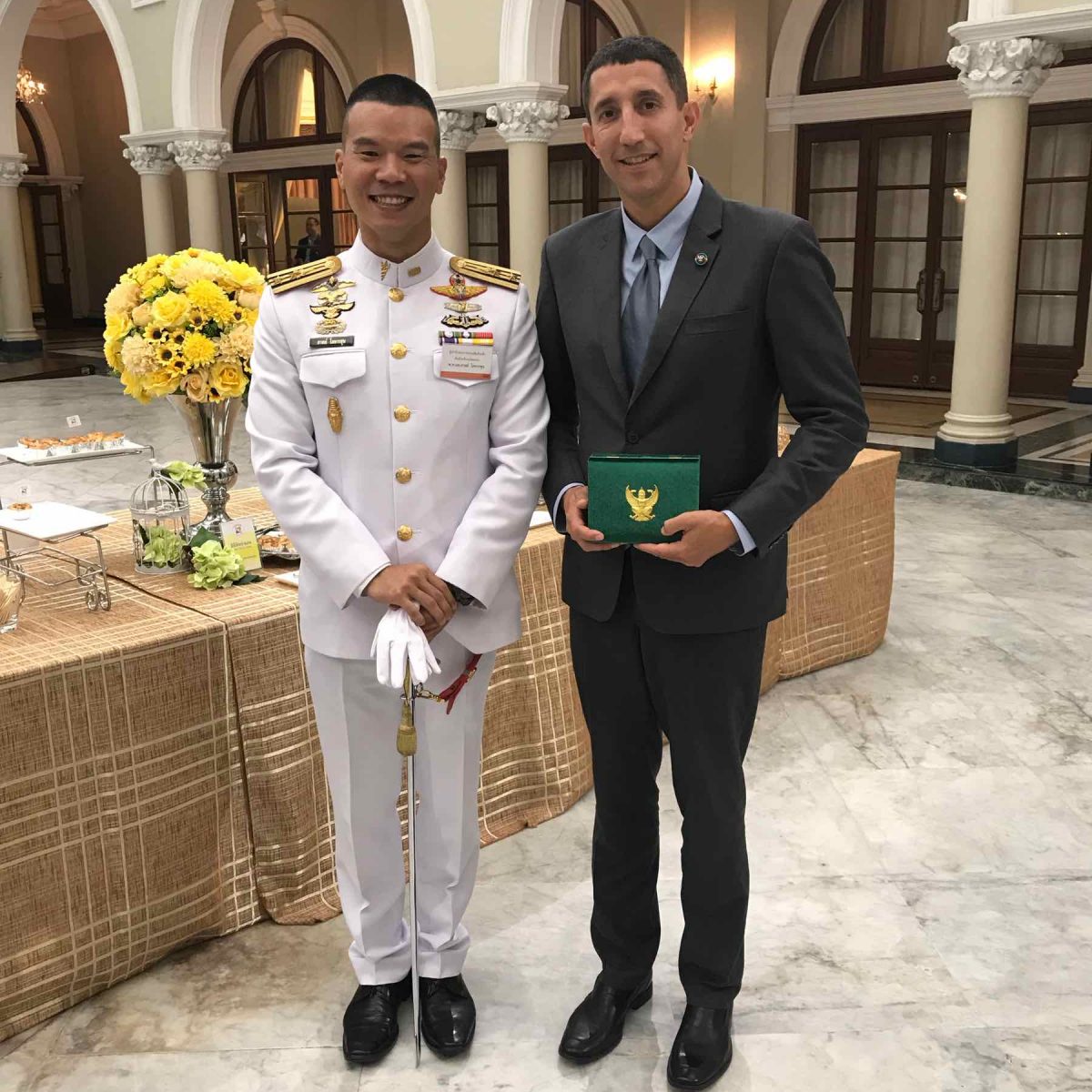 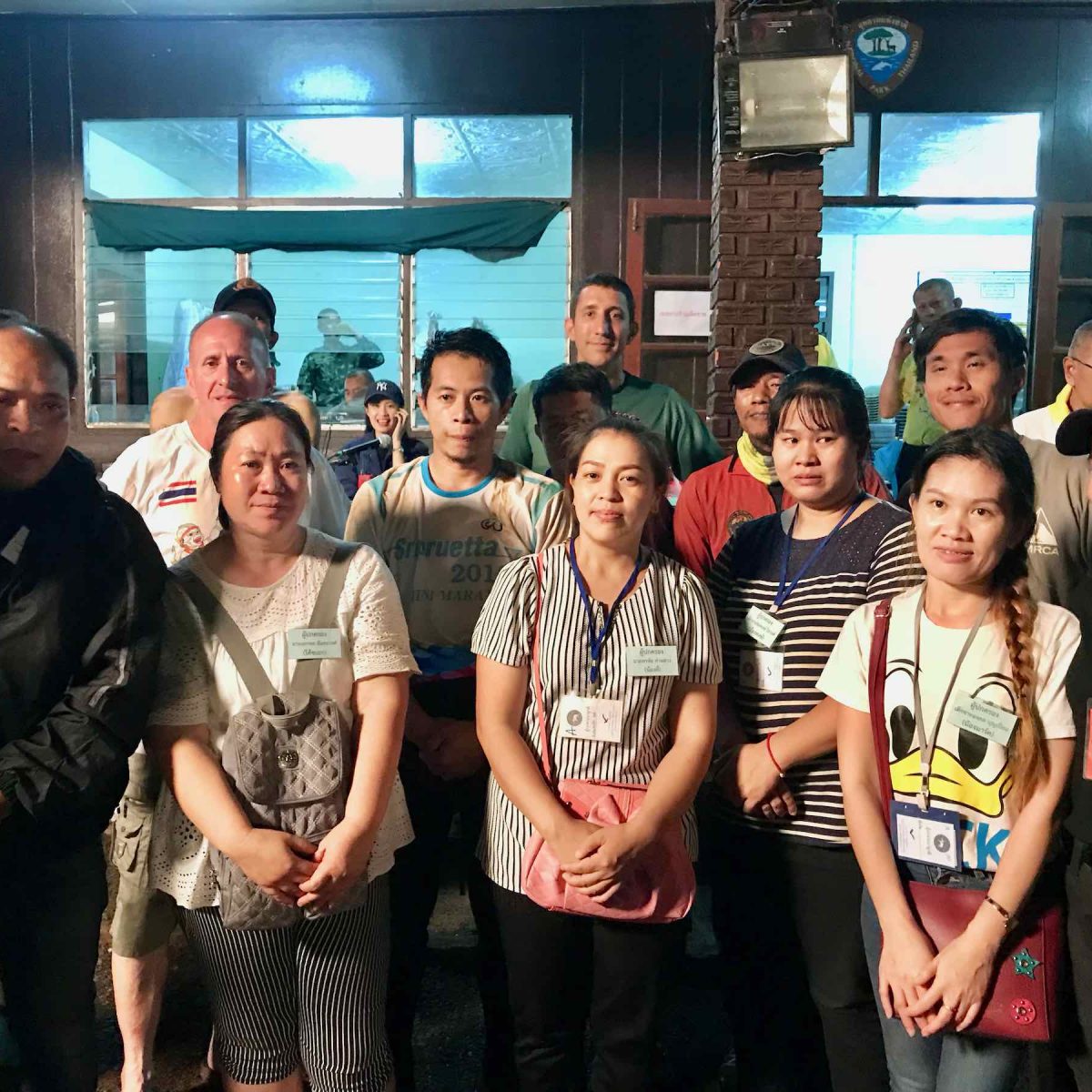 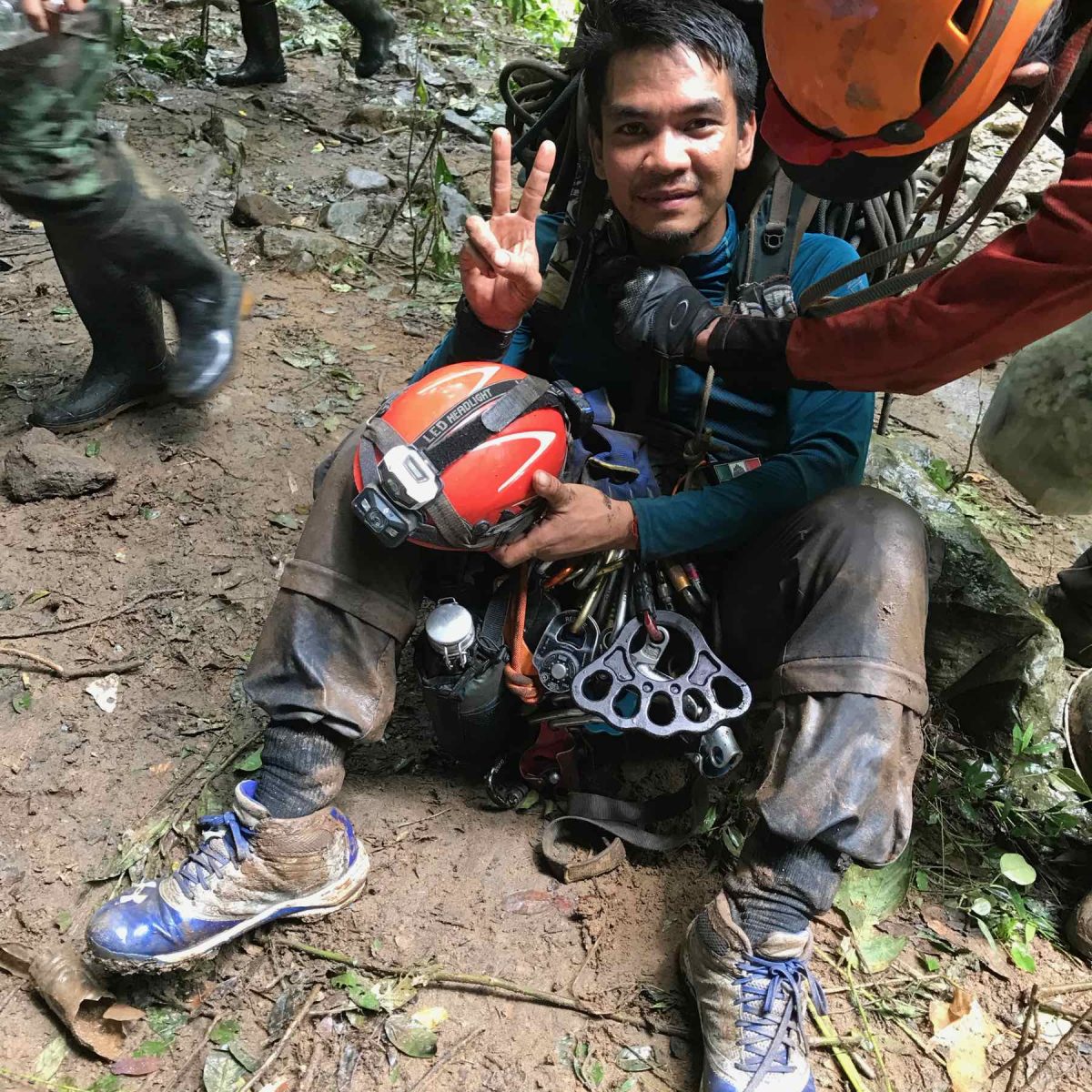 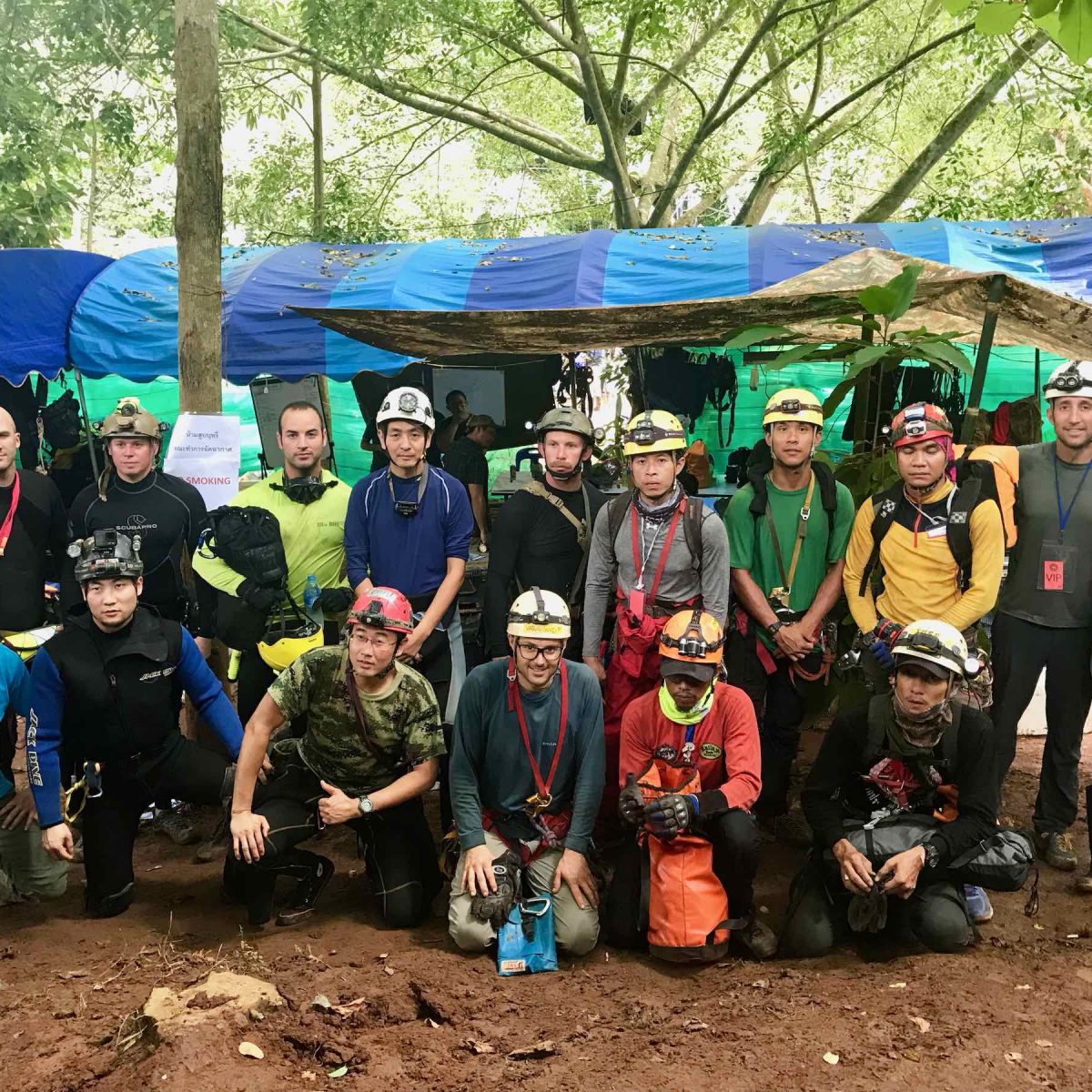 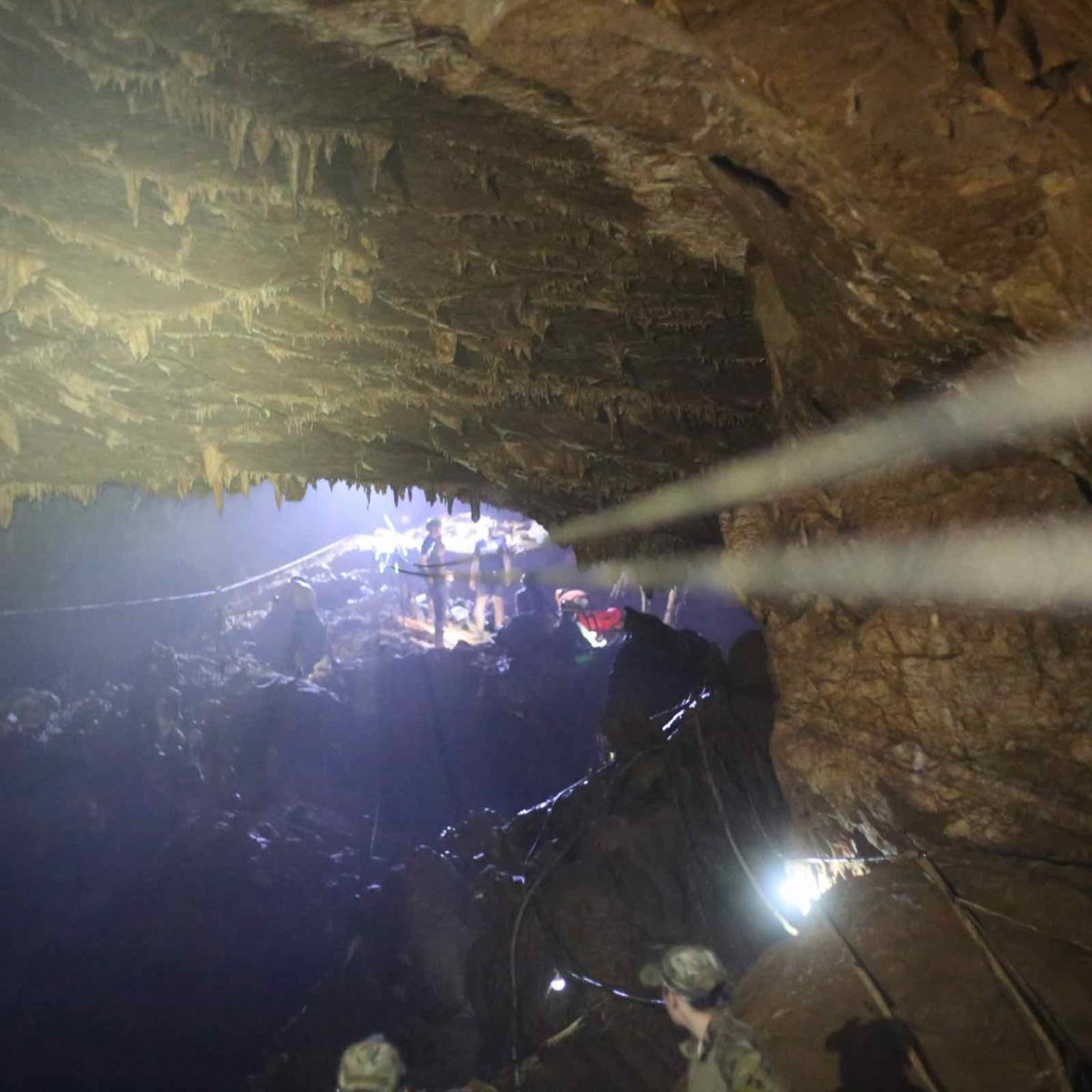