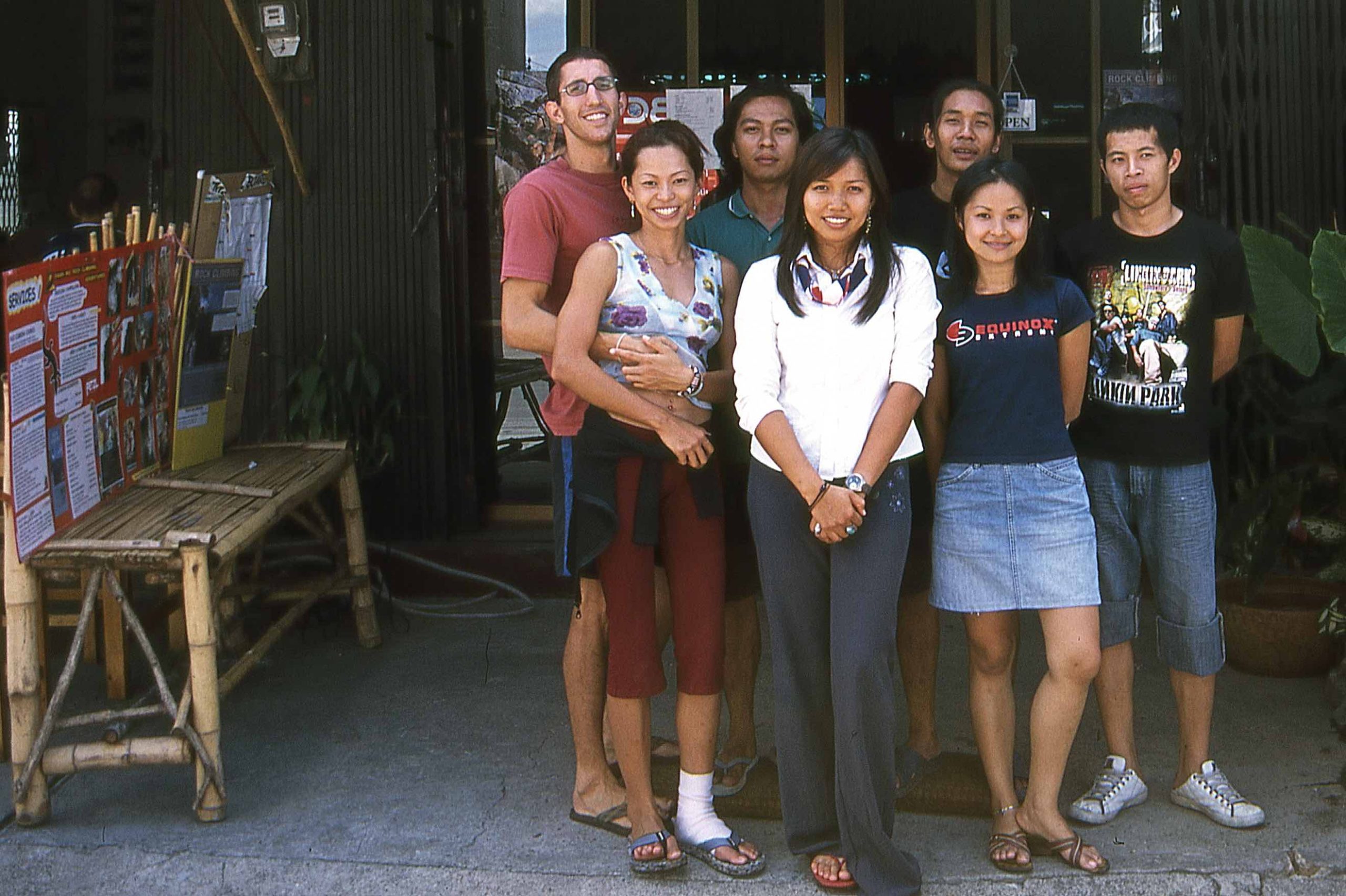 When we began as a climbing guide service in late 2002, there were just a handful of climbers in Chiang Mai. We were (and still are) climbers too and we wanted to build a community of climbers that existed with or without the ebb and flow of tourists that came to Thailand each year.  So in those early days, when climbers asked if they could ride in our red truck to the crag, we welcomed them on board.

Our red truck rides to the crag were filled with conversation and sharing of climbing stories and experiences and provided inspiration to our guided clients introducing them to the special world of climbing and its global community. This was the root of our core value, Commit To Community.  Those rides often continued with beers in the back of the truck and hang out sessions back at the office, sometimes well into the night. Though the beginnings of a small fledgling community began to grow, it wasn’t always so easy to find a climbing partner.  Chiang Mai was way off the beaten climbing path in those days. Often climbers would show up from Rai Lay with no gear and single climbers often found it difficult to find partners.

We took action and created a simple “Find A Partner” message board similar to one you would expect at any climbing community meeting point throughout the globe.  Keep in mind that this was before the world of iPhones, ubiquitous WiFi, and our beloved Facebook. It was nothing more than a printed sheet of paper tacked to an old cork board with a ballpoint pen on a string hanging next to it. Climbers would list the gear they had, arrival date, departure date and climbing ability and availability and phone numbers and emails so people could contact each other. Sometimes our staff would act as messengers between climbers letting Jane know that Jon was trying to get in touch to climb tomorrow. Original community members like Boom, Pi Ted and Mario will remember it well. I think it’s even possible that a few of the Chiang Mai climbing community marriages began with that board.

The board hung in front of our shop and eventually moved into the back where the current bouldering wall is.  It moved around a lot, but it was a fixture in our community. CMRCA staff would regularly manage the board, looking for partner ads that were still hanging up after the climber had left Chiang Mai. Eventually it would also include flyers about upcoming community events in the Ban Sahakorn Village near Crazy Horse, days in which transportation to the crag was available and upcoming events at the bouldering wall.

It was only a matter of time before our simple paper system would be strained by the tension between pen and paper and the new normal of mobile technology.  When community member Max Honch joined a Community Crank in 2012, he decided he wanted an easier way to get in touch with other like minded climbers without the need to check a piece of paper at the office and the Climbing Chiang Mai Facebook Group was born. We thought it was a great idea and when climbers contacted us about finding partners we encouraged them to visit the page. In Max’s own words,

“I’ve met a lot of people who are interested in climbing, Chiang Mai is made up of a lot of transients.”

So I suppose it isn’t surprising that when he left Chiang Mai, he passed the duty of managing the page to those still in town. Max had become friends with many of the active climbers who were also employees of CMRCA like Ethan and Brian. They took on the admin duties to ensure there was a place where new and old community members alike could get the beta they needed about climbing in Chiang Mai.  When they moved on they passed on admin duties to the next set of admins including White, Aey, Alan and others. While the paper partner board managed to stick around a few more years, the Climbing Chiang Mai FB page grew rapidly and became the center for community connection, finding climbing partners, travel partners, buying and selling used gear, or even just finding someone to share dinner and a beer.  Though it was a sad day we finally took down the cork board and instructed climbers to check on the Climbing Chiang Mai FB page when they were in search of partners and community.

Who Is Ready to Belay?

It was recently pointed out on Facebook that a business with staff serving as administrators of a community page could be interpreted as a conflict of interest, or potential lack of transparency. I am confident that CMRCA staff never stifled or repressed any topic of discussion on the Climbing Chiang Mai Facebook group. Moving forward, with the goal of creating clarity for all members of our climbing community, I have asked CMRCA staff to remove themselves from any administrative position in the Climbing Chiang Mai Facebook group.

We are happy to step aside and let others step forward to and take on the belay duties for the community. We are comforted in knowing that a group of local climbers and community members have stepped in to serve as admins of the group. Looking back to the early days, we set out to grow climbing and community with not much more than a cork board, a sheet of paper, a ball-point pen. We never could have imagined that 18 years later there would be an active group with more than 2200 members, led by local climbers both Thai and foreign, that serves to share experience and build community. We could not be more excited about the future of climbing in Chiang Mai, and we will continue to do our best to Commit To Community. 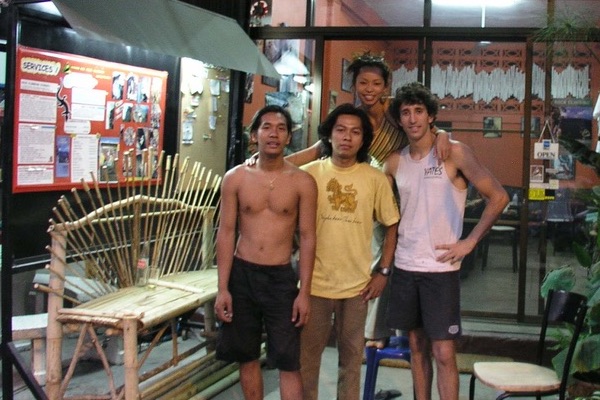 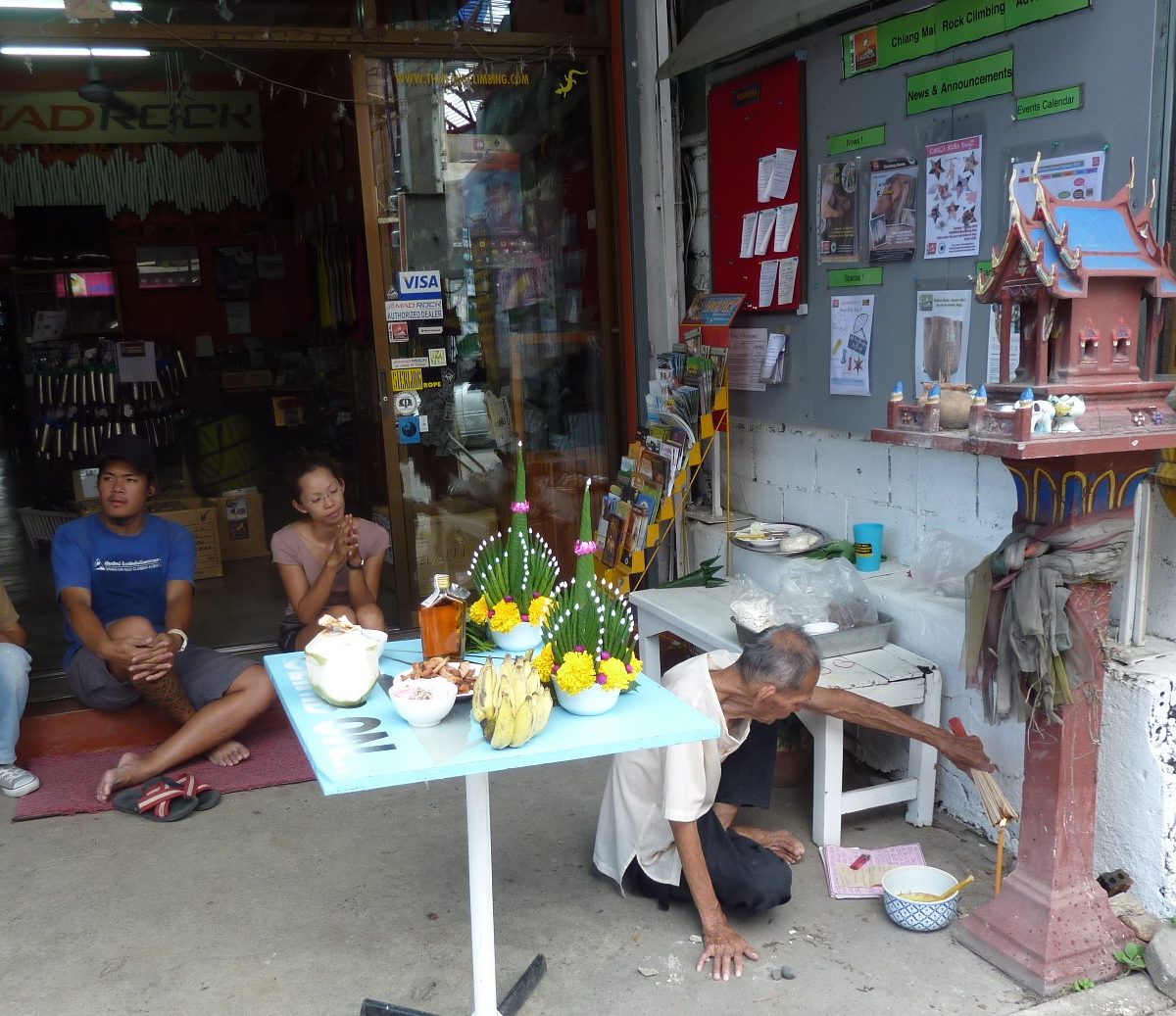 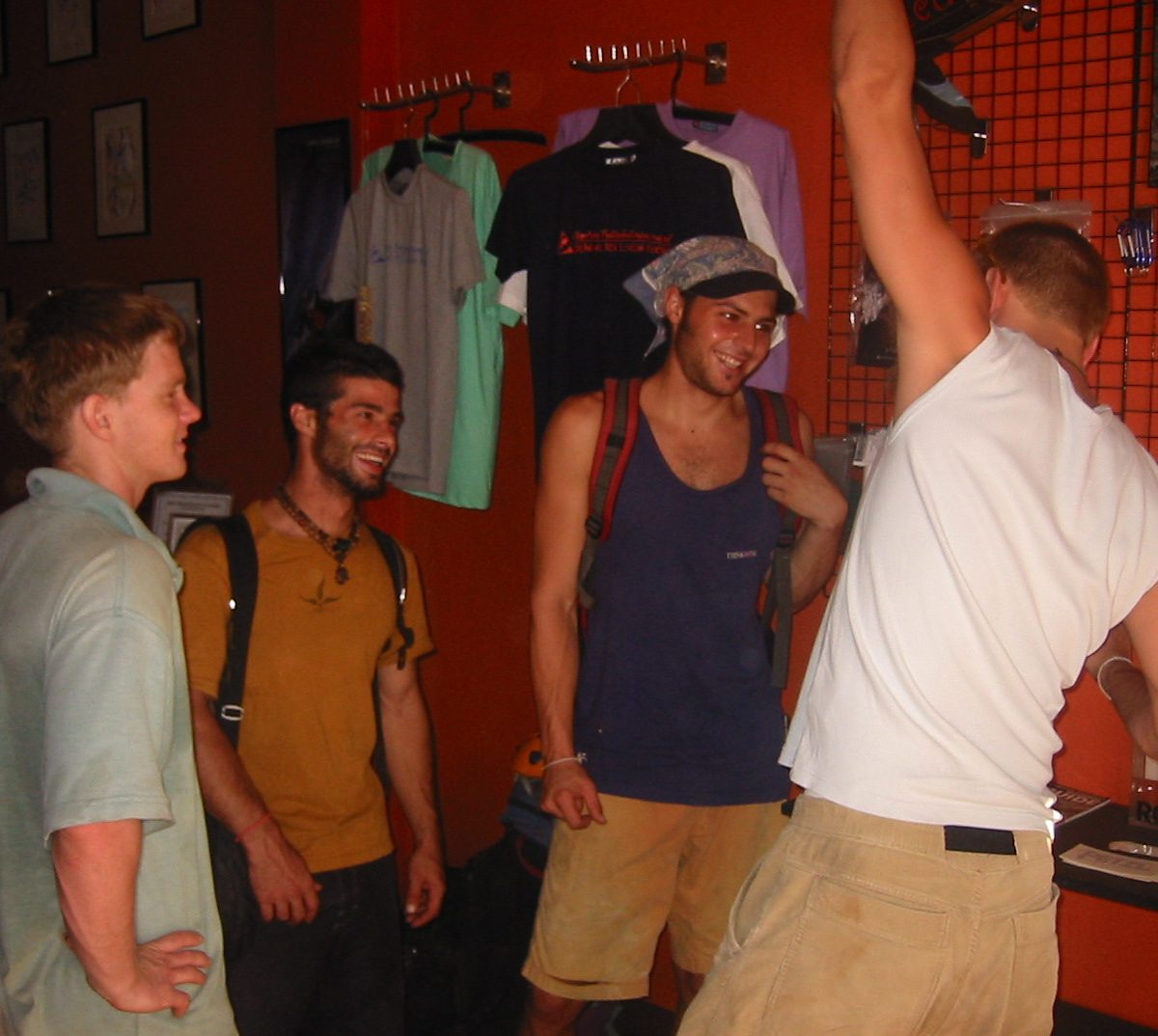 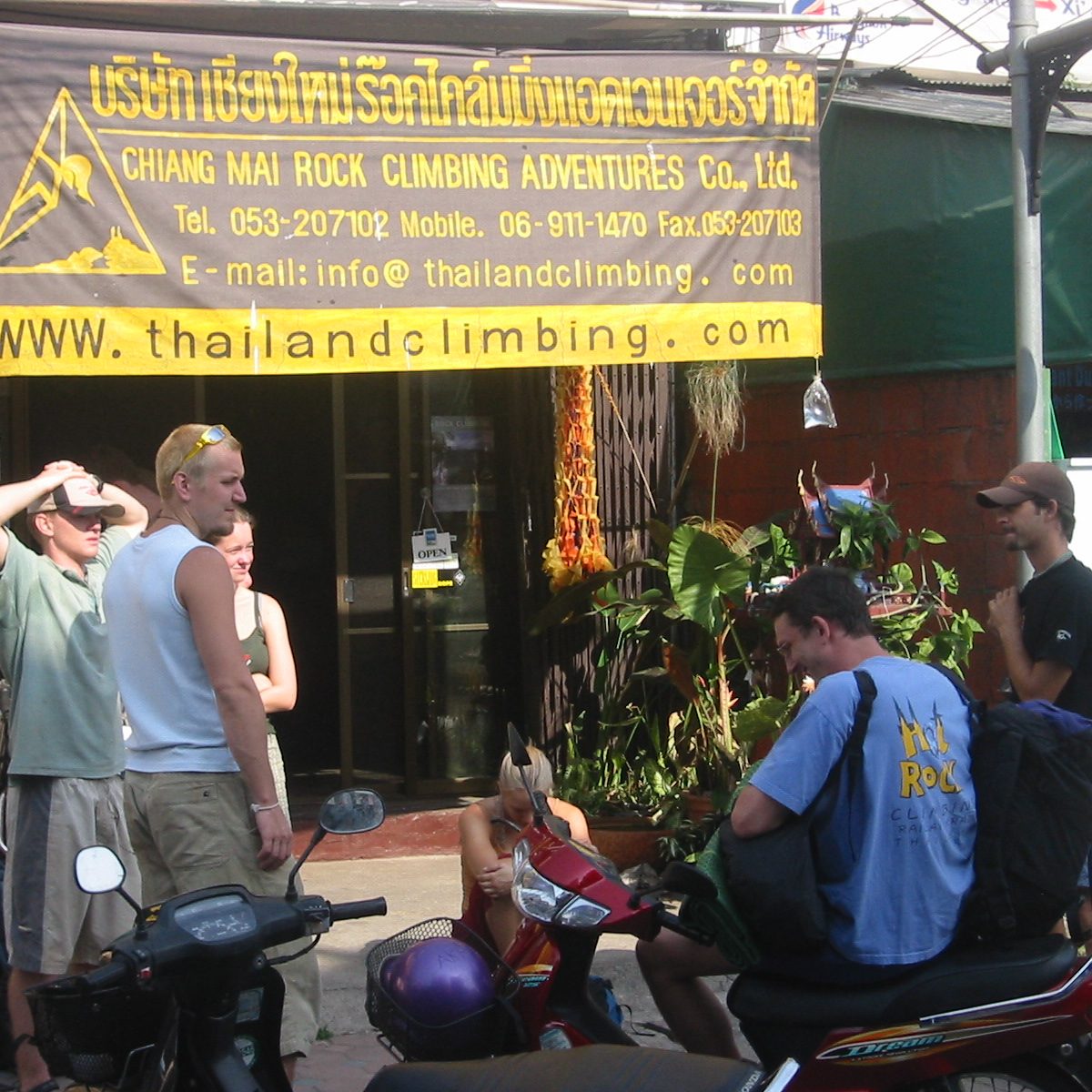